The first pieces of the picture of the profit in the third quarter: Many record profits, looming "loss-for-loss" businesses

The "terrible" profits of the third quarter of 2021 have gradually begun to be revealed in recent times, especially the growth rate of up to two - three digits above the not low base level of the same period in 2020.

The bleak color of the economic picture in the third quarter was clearly reflected with GDP growth falling deeply by 6.17% compared to the same period last year. However, contrary to the anxiety of many investors about a quarter of enterprises' difficult business activities, "terrible" profits have gradually begun to be revealed in recent times. In particular, the growth rate is up to two - three digits above the not low base level of the same period in 2020.

Accordingly, the cash flow still continuously poured into the stock market to help securities companies "make money" despite the outbreak of the pandemic. Thanh Cong Securities (stock code: TCI)  has estimated that TCI's revenue and pre-tax profit in the first 9 months of 2021 will be about VND 240 billion and more than VND 175 billion, respectively. Thus, TCI has far exceeded the year plan by 129% and 175% respectively.

Thus, in the third quarter alone, SSI's profit is estimated to reach a record in the history of operations with 836 billion dong. As of September 30, SSI's margin loan balance reached VND 18,100 billion, an increase of VND 2,600 billion compared to the previous quarter. 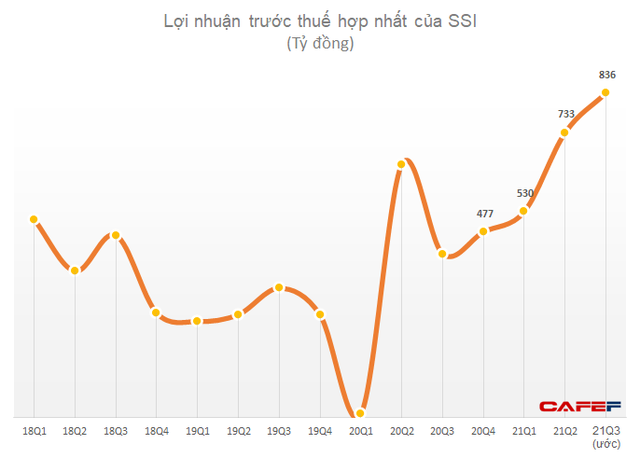 Similarly at VNDIRECT Securities Company (stock code: VND) , although the exact number of business results has not been announced in the last quarter, however, the move to increase the full year 2021 business plan by 55% for revenue and 82% of profit after tax compared to the old plan, showing extremely positive signals.

Not only VNDIRECT, a series of other securities companies also "reached" profits in 2021 soon after only 6 months and asked to raise their plans such as BIDV Securities Company (stock code: BSI) exceeding 20% ​​of the plan; SHS Securities (stock code: SHS) completed 96% of the year plan..

In the field of building materials, thanks to the localization strategy and self-control of main raw materials in the context of broken global supply chains, Vicostone Joint Stock Company (VCS) estimates that in the third quarter of 2021, net revenue of 1,859 billion VND 575 billion in pre-tax profit, up 23% and 22% respectively over the same period in 2020.

Accumulated from the beginning of the year, VCS's net revenue and profit before tax is estimated to achieve 76.5% and 80% of the 2021 plan. 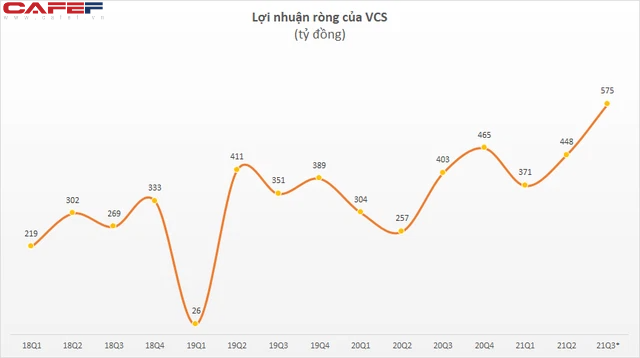 In the food sector, Nafoods Group JSC (stock code: NAF) in the third quarter of 2021 also recorded strong growth in revenue and profit thanks to exports. Europe is still the main market of the Company, contributing the largest to the company's revenue. In addition, dried products and nutritional seeds have officially entered the supermarket channel in the Russian market, while the seedling business has reached the whole year plan after only 8 months.

In the specific industry of hospitals, the only enterprise listed on the stock market is Thai Nguyen International Hospital (stock code: TNH) with an estimated net revenue of the third quarter of 2021 at VND 123 billion, up 39%. As a result, TNH earned 60 billion dong in after-tax profit, corresponding to an increase of 80% compared to the third quarter of 2020.

In the first 9 months of 2021, despite the complicated situation of the epidemic, TNH's revenue reached VND 308 billion and profit after tax recorded VND 110 billion, growing by 31% and 37% respectively. . Compared to the plan, the hospital has completed 73% of the revenue target and 79% of the full year 2021 profit target. 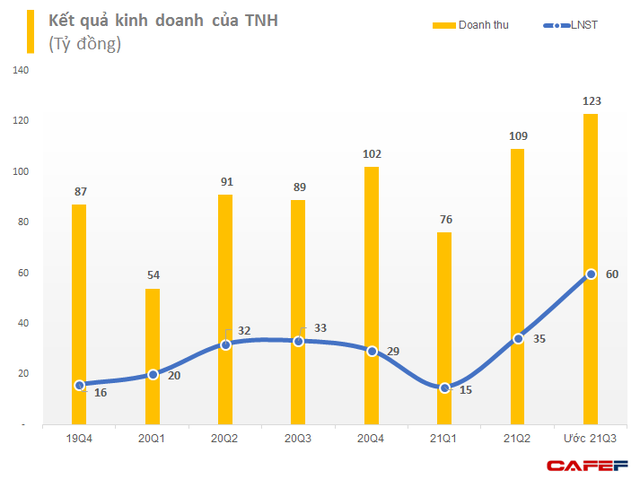 For the steel industry, profit growth in the third quarter of 2021 and the whole of the last quarter of the year is expected to break through when supported by export activity, especially benefiting from the escalation of global steel prices.

With galvanized sheet group, exports in July and August of Hoa Sen Group JSC (stock code: HSG) and Nam Kim Joint Stock Company (NKG) increased sharply over the same period, respectively, while domestic consumption volume decrease from 16-23% respectively. Profits in the third quarter of enterprises will generally continue to maintain their growth momentum compared to the same period in 2020, but the growth rate will not be as high as in the second quarter of 2021.

In addition to steel, the textile and garment industry is also considered a bright spot in the last quarter thanks to export activities. With the position of the 5th largest spindle producer in Vietnam, located in a favorable position for export, Damsan Joint Stock Company (stock code: ADS) continues to have very positive business results when signing the contract. many contracts to export CD Yarns and Towels to Japan, Korea and China

Consolidated revenue in the third quarter was about VND 333 billion, up 73%. As a result, ADS recorded a consolidated profit before tax of about VND 28 billion, equivalent to an increase of 90% over the same period. Accumulated in the first 9 months of 2021, net revenue is estimated at 1,030 billion dong, through which EBT is estimated at more than 85.2 billion dong - 20 times higher than the same period and 118% higher than the 2021 plan.

Meanwhile, after shifting the strategy to focus on exporting high-grade clean rice lines with higher export prices than Trung An High-Tech Agriculture Joint Stock Company (stock code: TAR)  has announced estimated business results of the third quarter of 2021 with Although revenue decreased by 8% to VND 500 billion, profit reached VND 40 billion, up 66% over the same period and doubled compared to the previous 2nd quarter. 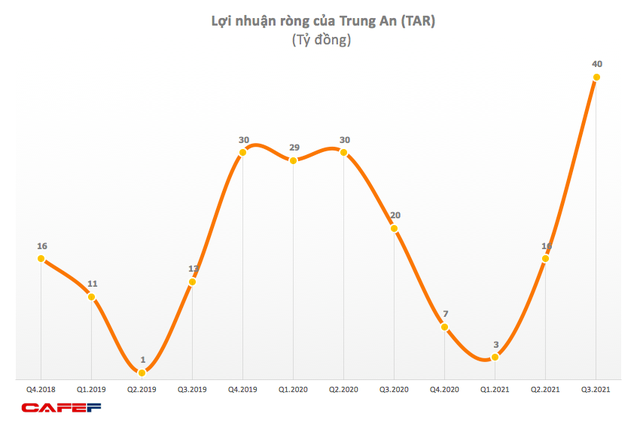 In contrast, the most obvious impact of the 4th wave of the epidemic was reflected in the group of businesses operating in the fields of transportation, tourism, and domestic hotel services. Vietnam Anh Duong Joint Stock Company - Vinasun (stock code: VNS)  said that the third quarter of 2021 will continue to record a negative profit, after the business suffered a loss of 66 billion dong in the previous quarter. .

In 2021, although VNS has cautiously set out a business plan with a loss of 79 billion dong; However, the temporary suspension of taxi operations in Ho Chi Minh City to ensure epidemic prevention in the third quarter made the Company "surpass" the loss plan after only the first 9 months of the year.

Or at another enterprise that also belongs to essential industries such as LIX Detergent Joint Stock Company (stock code: LIX), the estimated profit in the third quarter was only VND 30 billion, a sharp decrease of 50% compared to the performance in the second quarter. 2021. If it goes as planned, this will be the third consecutive quarter in a year that LIX's profit has fallen from the previous quarter.

Explaining the reason for the reduction in the target, LIX leaders said that the epidemic had made it difficult to deliver goods to the point of sale; At the same time, purchasing power at supermarkets, convenience stores, and e-commerce also dropped sharply. LIX's export markets were also affected by the epidemic when they failed to implement major promotions or failed to export as planned. 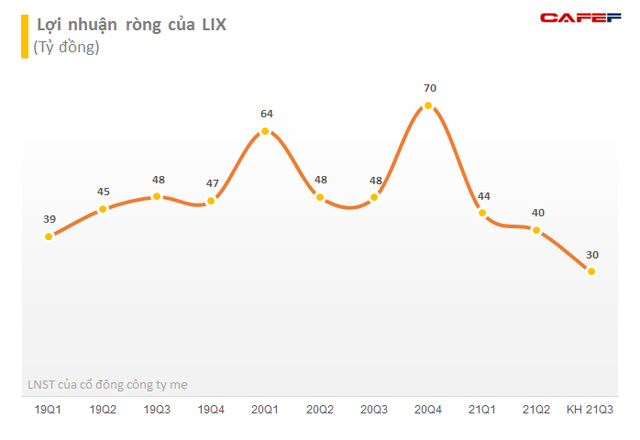